Part of Table to Table’s mission is to mitigate the environmental impacts resulting in climate change. We do this in two ways: 1) preventing greenhouse gas emissions by diverting organics from the landfill and 2) ensuring food that has already expended natural resources and contributed to greenhouse gas emissions is actually utilized. According to the most recent report by the UN’s Intergovernmental Panel on Climate Change, the global food system from land use to food production and transportation is responsible for as much as 37% of all greenhouse gas emissions.

A spring 2019 post-grad environmental impact study for Table to Table looked at two questions. First, how much CO2 would the rescued food produce if it had been sent directly to the landfill? “The yearly total emissions saved, after T2T vehicular inputs, is equivalent to the CO2 emissions from 17,400 pounds of coal burned, or more than 2 million smartphones charged, or about 39,000 miles driven by an average passenger vehicle,” the study finds.

Second, what resources did it take to produce and transport the food Table to Table was able to reclaim for use? While these resources haven’t been “conserved” by our work because these resources were spent regardless of our involvement, “T2T’s operations help ensure that more food goes towards feeding people so that these  resource inputs are not ‘wasted’.” 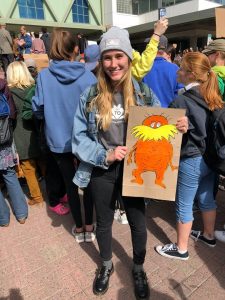 Friday’s climate strike was one of many that have taken place in Iowa City and all over the world for several weeks now, but this particular strike drew quite the crowd due to an appearance made by global climate activist Greta Thunberg. Greta is a sixteen year old climate activist who started the global climate strike movement called Fridays For Future in August of 2018. After arriving to the U.S. by sailboat and driving across the country in her Tesla, Greta attended her 59th climate strike right here in Iowa City.

It was an absolute honor to stand before this young activist and hear her speak about the hope she has for this planet. It was also an honor to stand among thousands of Iowa City residents who share a desire to tackle the issue of climate change through responsible actions and advocacy.

I attended the strike wearing my Table to Table beanie and t-shirt to represent Table to Table’s role in mitigating climate change through food rescue. I left the strike feeling grateful for my involvement with this wonderful nonprofit and eager to enact more positive change.