T2T staff, volunteers, Board members, and partner organizations compiled this post to honor Nicki for her five years of leadership of Table to Table: 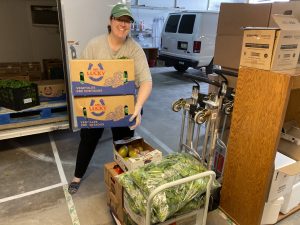 This spring marked Nicki Ross’s fifth anniversary at Table to Table! Nicki began as T2T’s Executive Director in March of 2017. Through caring leadership and a passion for finding ways to connect an abundance of nutritious food to our neighbors, Nicki has guided our organization through major increases in pounds of food rescued, a pandemic, and a relocation during the pandemic – just to name a few milestones.

During Nicki’s leadership, Table to Table has grown from rescuing 1.8 million pounds of food a year to rescuing 2.4 million pounds each year. We’ve done this by increasing our number of food rescue routes by 43% – from 35 routes each week to 50 routes a week. Hundreds of volunteers contribute to T2T’s accomplishments through rescuing food on routes, preparing our fleet, assisting with office needs, harvesting produce at local farms, planning fundraisers, and gifting their skills and talents for special projects that build T2T’s capacity to do good work for our community.

“When Nicki took the helm at Table to Table, it was already a respected, established organization, but it has risen to new heights under her leadership,” writes Charlotte Fairlie, T2T food rescue route volunteer. “The office is alive with a talented, expanding staff, whose hard work and ideas have led to new initiatives, such as last summer’s [produce] pop-ups. The network of community connections has spread, leading to an effective synergy among agencies.”

That synergy has benefited the entire Johnson County hunger relief network. Close relationships with recipient partners allow T2T to meet current needs to the best of our ability as quickly as possible. Coralville Community Food Pantry Executive Director John Boller shares: “Nicki is one of the most genuine, compassionate, and collaboration-focused nonprofit leaders that I know.”

In 2020, one result of Nicki’s collaborative efforts was the founding of the Iowa Gleaning Network to rescue farm crops and increase Iowans’ fresh produce resources. And T2T collaborations with community partners have led to produce pop-up distributions in neighborhoods to share high-nutrient foods while reducing barriers to food access. T2T has also prioritized collecting dairy, meat, and produce – valuable items for pantries – and increased those by more than 30% overall in the past five years. These efforts continued during the pandemic.

In 2020, Nicki wrote: “Letting any nutritious food go to waste at a time when some of our hunger relief partners were serving double and triple the number of people in need is simply unacceptable.” Reflecting on the first year of the pandemic: “For our neighbors enduring this health and financial crisis, T2T deliveries are the difference between families nourishing themselves with good protein, fresh fruits, and veggies or filling their bellies with food that is plentiful, cheap, and far less nutritious. During this time, T2T delivered enough food for at least one nutritious meal per day for every food insecure family in Johnson County.”

What makes Nicki a strong leader? “Her ability to have a real vision of what our organization can be, along with the ability to see and be aware of all the details that need to be addressed,” says Tom Jepson, T2T volunteer and former Board member. “I don’t know that I have come across a leader that has those two traits together.”

“It’s difficult to believe she has only been with Table to Table for 5 years–she leads like a veteran decision-maker and has guided the organization to exciting new heights in such a short amount of time,” John Boller adds.

“Also of note is the fact that Nicki was chosen as the Outstanding Executive Director by the United Way in only her second year in our community,” Tom Jepson points out.

Food rescue depends on the people behind it. “As a volunteer, I feel valued,” says Mary Kelley, who volunteers on a weekly Friday route with her husband Mike, and recently joined the Table to Table Board of Directors. Volunteers now collectively contribute 20,000 hours to T2T’s mission per year, their numbers having grown by 80% since 2017.

“Besides the statistics that provide evidence of Nicki’s success, I would add that, equally importantly, she fosters a cheerful, welcoming atmosphere in the office,” says Charlotte Fairlie. The supportive and welcoming culture Nicki has helped foster at T2T comes back to her appreciation for the T2T team of staff and volunteers.

In 2021, Nicki wrote: “Let me express one more time gratefulness for our T2T team and the staff and volunteers of all our partners who work tirelessly. Their commitment was unbowed by the sustained adversity of this year. Their work, guided by their hearts, their creativity, and courage allowed us to innovate and lead. I am incredibly proud to see them do what sometimes seems impossible.”

“Nicki constantly strives to make things better… she inspires all of us to do our best!” Mary Kelley adds.

We’d like to echo John Boller’s closing sentiment: “Here’s to another 5 years!”

Talk with Nicki and T2T staff in person at our 25th Anniversary Dinner! Ticket sales for this fundraiser help us do critical work in redistributing abundance to our neighbors. Get yours here!

« Volunteer Spotlight: With humor and hard work, Marnie & Mike deliver good food» Know your Best By, Use By, & Sell By dates