Reflections on Two Summers of Gleaning Across Iowa 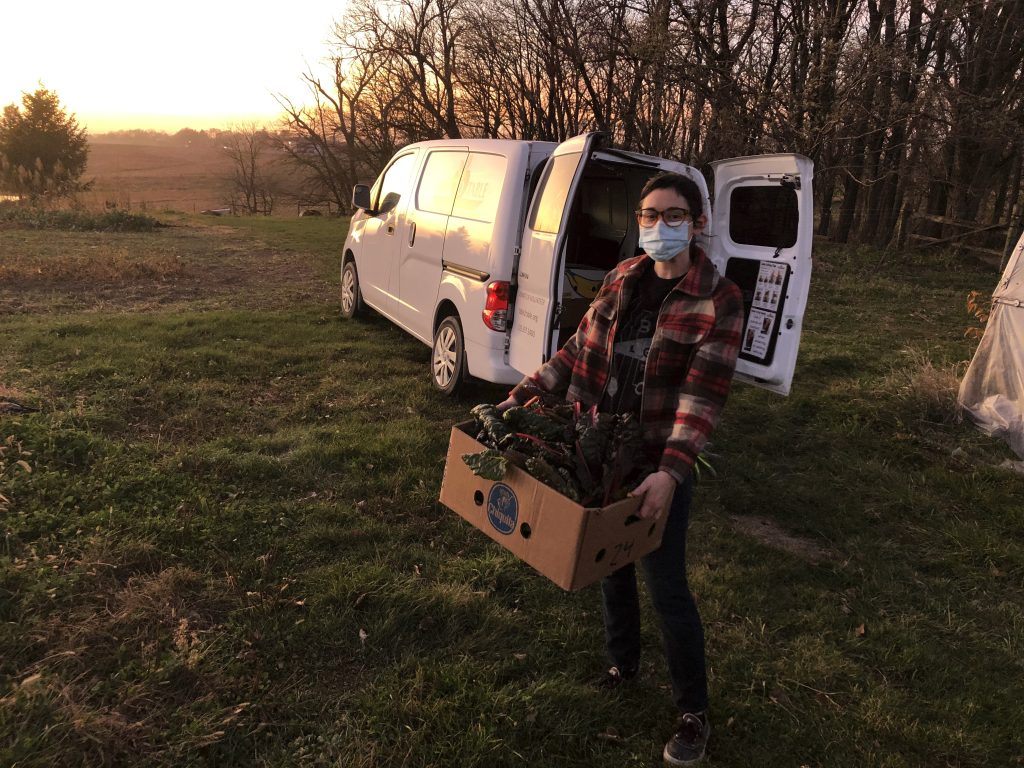 When I came to Iowa Gleaning Network as the Program Development Coordinator there was pretty much nothing there but opportunity, pulled from the founder’s brains into reality through their knowledge of the food system landscape and hunger in Iowa. By talking to the right people at the right time, and sheer determination and perseverance, IGN was formed to push forward food justice and increase access to healthy food during the economic crisis brought on by the Covid19 pandemic.

I was brought on by Table to Table to organize the Network and lead the three gleaning coordinators, who had already been hired ahead of me, meaning I had to hit the ground running. On top of that, my first week was only a few days after eastern Iowa had been hit by a derecho, a freak storm of direct, high-speed winds that devastated much of the area, and left thousands, including myself and my family, without power for many days. Being thrown into this new position at this extra-tumultuous time gave me a glimpse of what food rescues, and community-minded people in general, can do in a time of acute crisis. In my neighborhood I saw folks helping each other to clear large branches, directing traffic around obstacles and down cleared streets, and extension cords and power strips extending from generators to share limited power so neighbors could at least reach their loved ones. 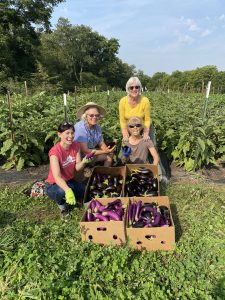 When I got to Table to Table, it was all hands on deck, a kind of organized chaos. It was my first week, but I was tasked with helping clean, organize, and, of course, to distribute food – I got behind the wheel of a big transit van for the first time and delivered 1000 lbs of onions around Johnson County that had come from the first joint IGN gleaning event at a farm near Waterloo. It was a stinky but satisfying first mission.

My second week, I visited gleaning coordinator, Jessie, at Feed Iowa First in Cedar Rapids. The destruction in Cedar Rapids was like nothing I had ever personally experienced before – whole trees ripped from the ground, detours and caution tape everywhere, roofs and walls knocked down or just missing all together. A lot of people were outdoors cleaning, chatting, helping each other out, or just walking, as it was easier to get around on foot. I went back to Cedar Rapids the next day to join Feed Iowa First on one of their produce distributions at an apartment complex that had been hit hard by the storm. What I kept seeing– despite the destruction, the lack of power, the heat and humidity, and having to wear masks because we’re also in the middle of a pandemic– were people smiling and laughing, kids playing, people lending a hand to their neighbors; folks making the best out of an extreme situation and taking action to help each other out.

As my year with VISTA went on, I kept these observations present in my mind – that people want to help and laugh and be together. Through autumn and winter I researched gleaning, reached out to other gleaning organizations across the country, and designed and wrote a 20+ page manual on gleaning, spreadsheets to store gleaning data, and slideshows with instructions and information on gleaning, safety, and our mission. In all these resources I tried to instill a sense of what I had felt in my first weeks on the job – that gleaning could provide more than just food in bellies. Gleaning is community.  Gleaning is helpful to so many:

Gleaning excess fruits and vegetables to give away to those who want them should be the standard, not the exception. I did my best to take care of the Network and help it grow to its full potential. At the end of the first season, 2020, we had gathered just under 25,000 pounds of produce with 3 IGN Gleaning Coordinators who were hired halfway through the growing season. 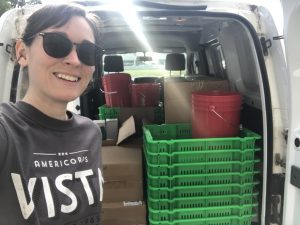 After their service was over we came to the conclusion that the gleaning programs needed resources, not only the resource and instruction material I was writing, but also physical equipment to get their jobs done more effectively. I wrote a list of supplies each program would need for the upcoming season, priced everything out, and applied for and received a grant to purchase everything our programs needed for success. A highlight of my VISTA service was when I assembled all the gleaning kits and personally drove them to each of the 7 gleaning program host sites across Iowa. I happily drove my thousand mile cross-Iowa road trip and got to meet each coordinator.

I was especially pleased to meet Corinne Sills, the coordinator in Mason City, who is the only coordinator to return for a second year with IGN. Our discussions focused on the idea that gleaning is a community taking care of itself, sharing the abundance that springs forth from labor, and of people giving what they can and taking what they need –mutual aid, not charity. It’s clear that this message is shared by many in our state. In only our second year the network collected more than 70,000 pounds of fresh produce. Seventy thousand pounds of nutritious food that might have been left in the field and has now made its way to Iowan tables.

I hope that through my work as the Program Development Coordinator I have set the Iowa Gleaning Network on a good path toward long-term sustainability and many years of service to come. Gleaning may not be common in our culture, but it is simple. Gleaning is people coming together from various walks of life to gather what they can, save what’s worth saving, and to help each other out. It is mutually beneficial to all involved, and it is a sign of a healthy and vibrant community that can take care of itself and grow stronger in doing so. Gleaning is giving. I know no gleaner who doesn’t want to share.

« Farewell and Happy Trails, Emily!» A season in the life of a gleaner: Nora reflects on her time at T2T